Sam has a very special place in our affections because he was destined to become the founder member of our publishing company Jean Greenhowe Designs.


My suggestion for the toy was Sam Scarecrow but he was rejected on the basis that such a character may not have world-wide appeal to the readers. Hmm, we now have photographs of Sam from every corner of the world!

My Sam idea was put on hold and instead I designed a cuddly clown. Here he is on the front cover of Woman’s Weekly, March 1982. The readers loved my design and over half the entries to the competition were clowns.

Fast forward to 1985 and another  Woman’s Weekly/Littlewoods charity knit competition. This time I was determined

to create a scarecrow and after some discussion, got my way. When Woman’s Weekly saw Sam they knew at once that he was a winner, a stand-out character with lots of delightful detail – and everything knitted. Readers responded to Sam with enormous enthusiasm and scarecrows far outnumbered the garments. A star was born!

1986 was another milestone for Sam, when he was featured on the front cover of my hardback book Knitted Toys. The first print-run completely sold out through pre-publication orders.  Knitted Toys was

Soon after, I created Sally Scarecrow as a sweet companion for Sam. The design was published in Woman’s Weekly in 1987 along with some of my soft toy designs. Woman’s Weekly readers were delighted with Sally’s knitted details, especially the frills on her panties!

After Sally, I began to think ‘family’ and the Twins were first off the needles, followed by Baby Sunshine. Toward the end of 1987 I was working on the senior scarecrows – Grandpa and Grandma. And so, The Scarecrow Family became our very first Jean Greenhowe Designs production. 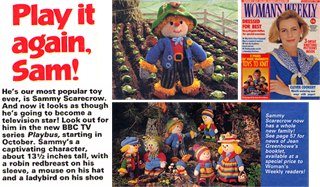 The booklet was launched as a special offer in Woman’s Weekly on 23rd August 1988. The mail order resulted in well over 55,000 sales and thousands of congratulatory letters arrived along with the orders.

By 1988 Sam’s fame was such that he made his television debut in the BBC’s new series Playbus. The producers were well aware that Sam was a much-loved character, already owned by many thousands of children who would certainly want to see his adventures on television.

Sam was featured every Thursday when the programme was filmed on location outdoors, the ‘nature theme’ being most appropriate for a Scarecrow character. However, our original Sam had by that time acquired ‘star

status’ and therefore stand-ins were required.

I was asked to knit three Sams, two for the programmes in case of rain or accidents in muddy puddles etc and I kept the third Sam just in case. Here is a line up of the trio, identical triplets! Sam had many adventures on Playbus but we imagine he enjoyed the trip to Thornton’s chocolate factory best of all!

In 1989 I designed a Sam sweater for Woman’s Weekly. He had pride of place beside such stalwarts as Paddington Bear and Little Grey Rabbit. 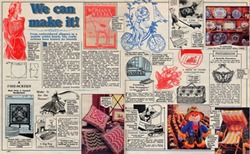 He was also honoured in Woman’s Weekly’s souvenir brochure which celebrated the magazine’s 80th birthday. The subject matter covered just about everything which had appeared in the magazine from the very first publication in 1911. Sam appeared on the ‘We can make it’ pages, the only soft toy to be featured.

He had a brief acting role in the Scottish soap Take The High Road where one of the characters knitted a Sam for a new baby in the series. Eventually, we discovered that he was knitted by one of the real life actors.

We also understand that a Sam sits in The House of Commons, a privilege accorded for helping to raise funds for a heart machine.

We have scrapbooks full of magazine cuttings where Sam and the family can be seen in people’s homes and some of the owners are famous.  They also turn up in newspaper features, usually connected with charity events.

Sam was born off the needles in 1985 and his reproduction continues and is set to go on into the future.  We cannot even begin to estimate the number of Sams in existence and it is quite a remarkable achievement that without being in a storybook, without any merchandising, without any of the usual razzamatazz or worldwide publicity, he has created his very own place in knitting history.